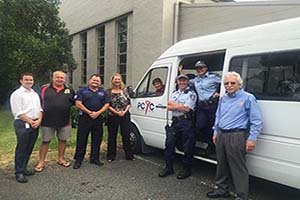 Sharon Bird, Federal Member for Cunningham, today announced the first round of successful applicants for funding under the Stronger Communities Programme.

The Stronger Communities programme funds small capital projects in local communities with funding of $150,000 per electorate per year.  The project runs for two years commencing 2015-16 with grants between $5,000 and $20,000 available – all applicants need to confirm matched funding in cash and/or in-kind on at least a dollar for dollar basis.

The first successful applications under Round 1 for the Cunningham electorate are:

Sharon Bird said that the community grants would be a big help to these local community groups.

“I know how hard it is for local groups to fundraise to upgrade facilities and replace items such as scoreboards.  It can take months and years for volunteers in small organisations to raise this type of money for capital works projects,” Sharon Bird said.

“The community bus that Wollongong PCYC currently uses is almost 20 years old and worn out.  The bus services a number of community groups such as Rotary, the Disability Trust, Purple Ribbon Workshops, Twilight Tournaments, Youth off the Streets and the William Campbell Foundation.

“While Labor’s Volunteer Community Grants program, which the Liberals abolished, was more useful as it did not require dollar for dollar contributions, the Stronger Communities programme will assist local community groups to undertake these small capital works projects to improve their services.

Sharon Bird indicated that there will be further applications from round one to be announced but round two is already open and closes on 29 April.

“I would encourage any other community groups to check the guidelines and put in an application if they have a project requiring funding.” Ms Bird said.